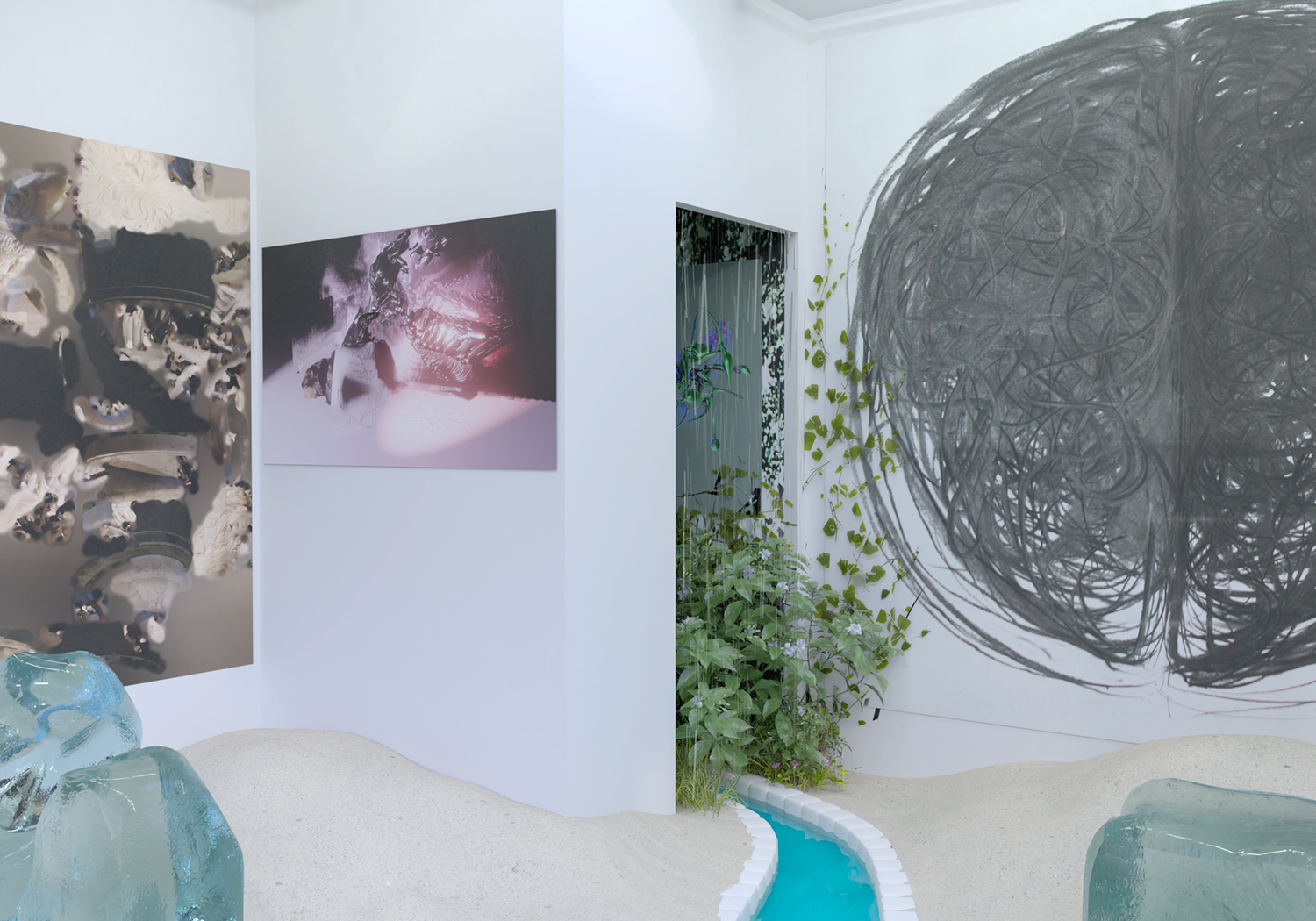 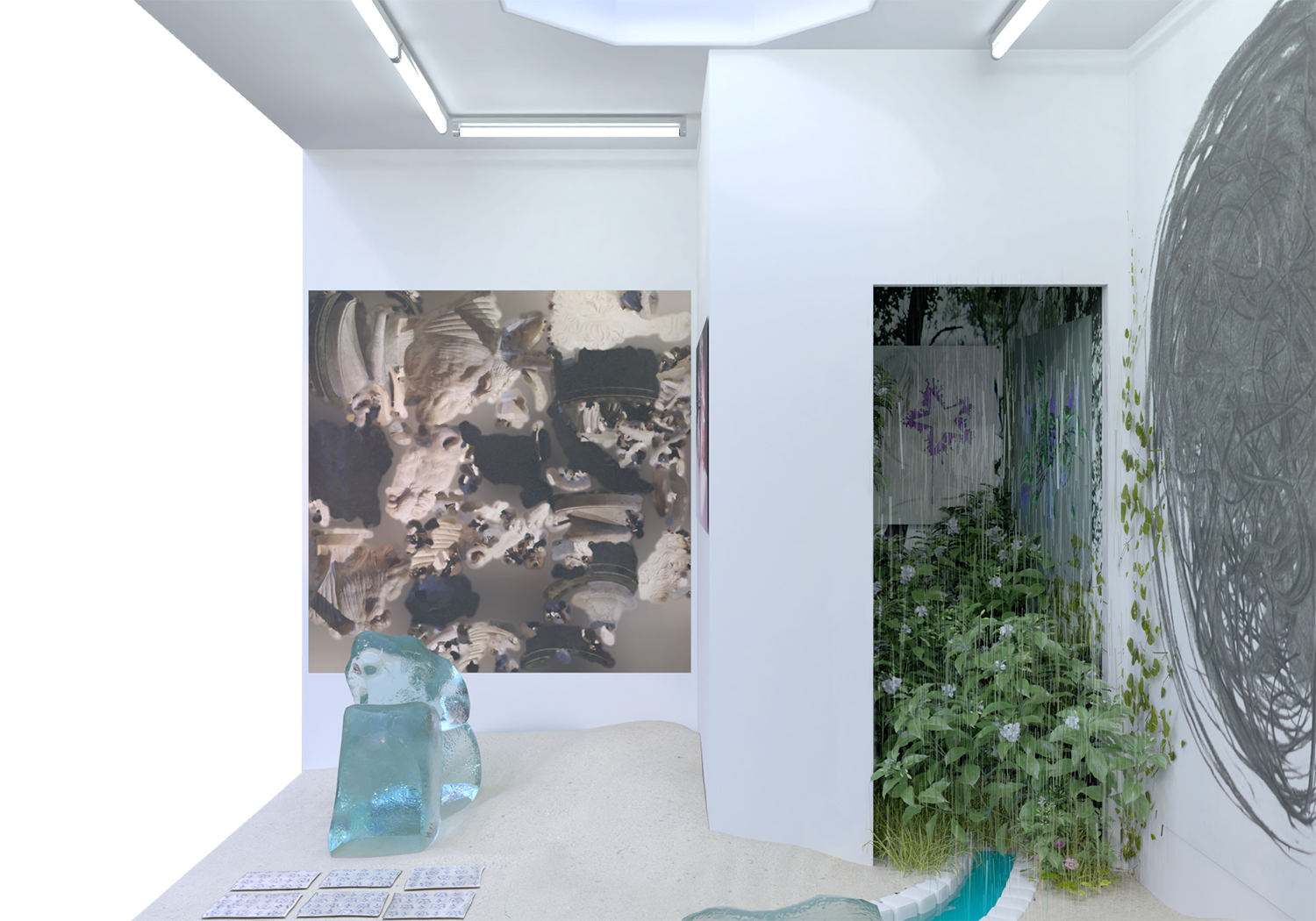 The highly polished 3D digital rendered artworks with heavily distorted geometric compositions reflect the anxiety surrounding the fraught future of art making. In contrast, the innocent nature of traditional dry media creates balance and conversation amongst the artworks shedding a hint of optimism amongst the uncertainty.

Winter in Dryden is a manifestation of the central premise of the mission of Sosâge; to act as a catalyst for conversations which expedite progress in the art field. It illuminates the fluidity of high- and low-brow in our efforts to stimulate growth within the ecosystem of the Auckland art scene. As our occupation of Dryden Street comes to an end, we are proud of our contribution and optimistic about the increased agency of artist-run initiatives.

These works are a bridge connecting tradition and innovation, both essential for a healthier ecosystem.

The Perfect Neighbour and Un / Nature

Off the beaten track in quiet, suburban Grey Lynn the old corner shop on Dryden Street was lit up; outside on the footpath the flames from the brazier became a beacon. People gathered around the fire for the last opening at Sosâge artist run space. For two years Sosâge (first known as Mayonez) presented fourteen or so projects including performance, installation, photography, painting and multimedia all made by young and emerging artists. I was an instant fan right from the beginning.

Old Grey Lynn in the 1970s to the mid-1980s was a suburb of ramshackle villas inhabited by Pacific Island communities, poets, musicians, writers and artists – I arrived in 1980 to experience a community rich in creativity and diversity. The New Grey Lynn has now been gentrified with keypad locks on high gates, rear-ended renovated villas and athleisure wearers. The old corner shop in 43c Dryden Street had been dormant for many years; the arrival of an artist run space was a nod to this past history and positioned Sosâge away from the usual haunt of K’Rd, where the gallery scene is now located.

In 1992 the first gallery Teststrip appeared on K'rd – the gallery collective was me, Daniel Malone, Denice Kum, Merylyn Tweedie, Giovanni Intra, Gail Haffern and Lucy MacDonald. We were frustrated by the lack of engagement of contemporary art practice by the local art scene so we decided to make it for ourselves.

Teststrip exploded onto the scene with enthusiasm, bravado and panache, more performative and playful than anything the local art world had seen to date, its members seizing the “opportunity to band together to make daring raids on the art world, under the pirate flag of loosely distributed networking and ambitious team orientation” (Butt 1998, 142). They showed their own work, they showed their friends’, but overwhelmingly they exhibited “a range of other artists whose work is either unknown to public galleries or a bit too rugged to show without explanatory captions and general spit and polish” (McKenzie 1993, 34).1

An artist run space is an important bridge post-art school, a way to support your own and others’ art practises – you find your people, find a cheap space and share the rent. The average time frame for survival is 2 to 3 years, closing usually due to burnout.

Again in the words of Bugden:

Artist-run spaces are also known as alternative spaces, a usage which is significant in that it claims a position outside the mainstream.

"It is a unique journey for a group of people to take, usually on a volunteer basis, to firstly create the physical space, to create the purpose and infrastructure, to earn confidence and a reputation from artists and the community, to commit lots of energy and to invigorate inspiration in yourself and others" (Eland 2002, 49).

This statement, by Steve Eland of Mass Gallery (Melbourne), is emblematic of the do-it-yourself narrative that runs through artist-run culture.2

The Parisian arcades built in the 19th Century consisted of covered walkways which linked the major avenues of the city, lined with stores on both sides, and people could amble through these spaces, shop and socialise away from the weather and chaos of the streets.

“A product of capitalistic development and bourgeois investment ( they were financed by the businessmen of the time ), arcades profited by the real estate speculation that followed the French Revolution.”3

“Replacing wood ceilings with glass sheets through which the sunlight could filter, covered arcades were totally innovative. They also inaugurated window shopping, an activity in which rich and poor Parisians could participate side by side finding in this disparate voyeurism an unprecedented, however relative, urban equality.”4

This retail structure has morphed into the 21st Century shopping mall, brightly lit multileveled spaces mesmerise our gaze, we are glazed and dazed by commerce. All our needs are meet under one glass roof, walking past large glass windows of shop frontages we see a mass of products on display, capitalism at its height.

The contemporary art fair offers a similar experience for the viewer where a series of booths are organised around walkways like store fronts and multiple artworks are displayed for sale. Like enlarged dioramas, we can move through these portals and experience the glare of the art business at work and in real time – we as audience become voyeurs. But now the art fair may be over for a while, as there is little appetite to gather in large numbers or travel globally as Covid 19 rages again and again.

May Fair art fair reinvents the art fair platform where a rotation of booths are presented as digital galleries, like contemporary “ cabinets of curiosities,” and the viewer is suspended in an artificial terrarium of pixels. Sosâge’s booth presents a possible post-nature proposition, an overgrown dense rainforest, a nod to the green lit bathroom at Dryden Street, a river too blue, and giant melting ice blocks. The wall works operating as halves or splits, wings, a cerebrum. In other works, a repeated sheep’s head and toxic burnt-like material add to a post-nature reading of the booth.

The gatherings on Dryden Street and the celebration of artists autonomously making things happen is something I will miss from suburban Grey Lynn.

How to purchase an artwork
Find out more about Rainer Weston

How to purchase an artwork
Find out more about Mia Brailey

How to purchase an artwork
Find out more about Liley Loh

How to purchase an artwork
Find out more about Arisa

How to purchase an artwork
Find out more about Felix Giles

How to purchase an artwork
Find out more about Llyazel

How to purchase an artwork
Find out more about Nick Jamieson

Sosâge is 100% self-funded, we have and will continue to offer a free, open-minded forum and space to accommodate local and international emerging artists to share their ideas and works with the community.
Back to the Fair