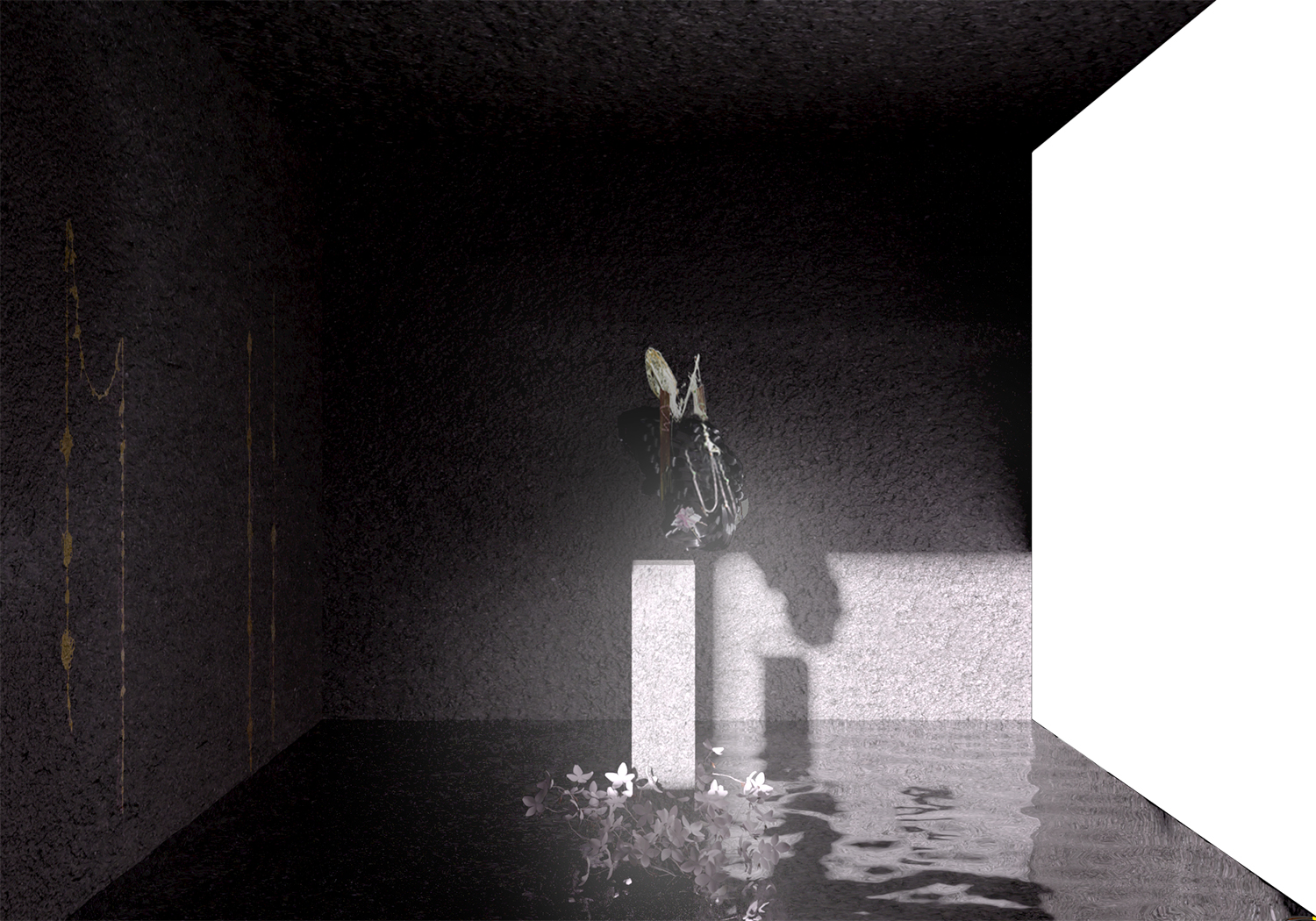 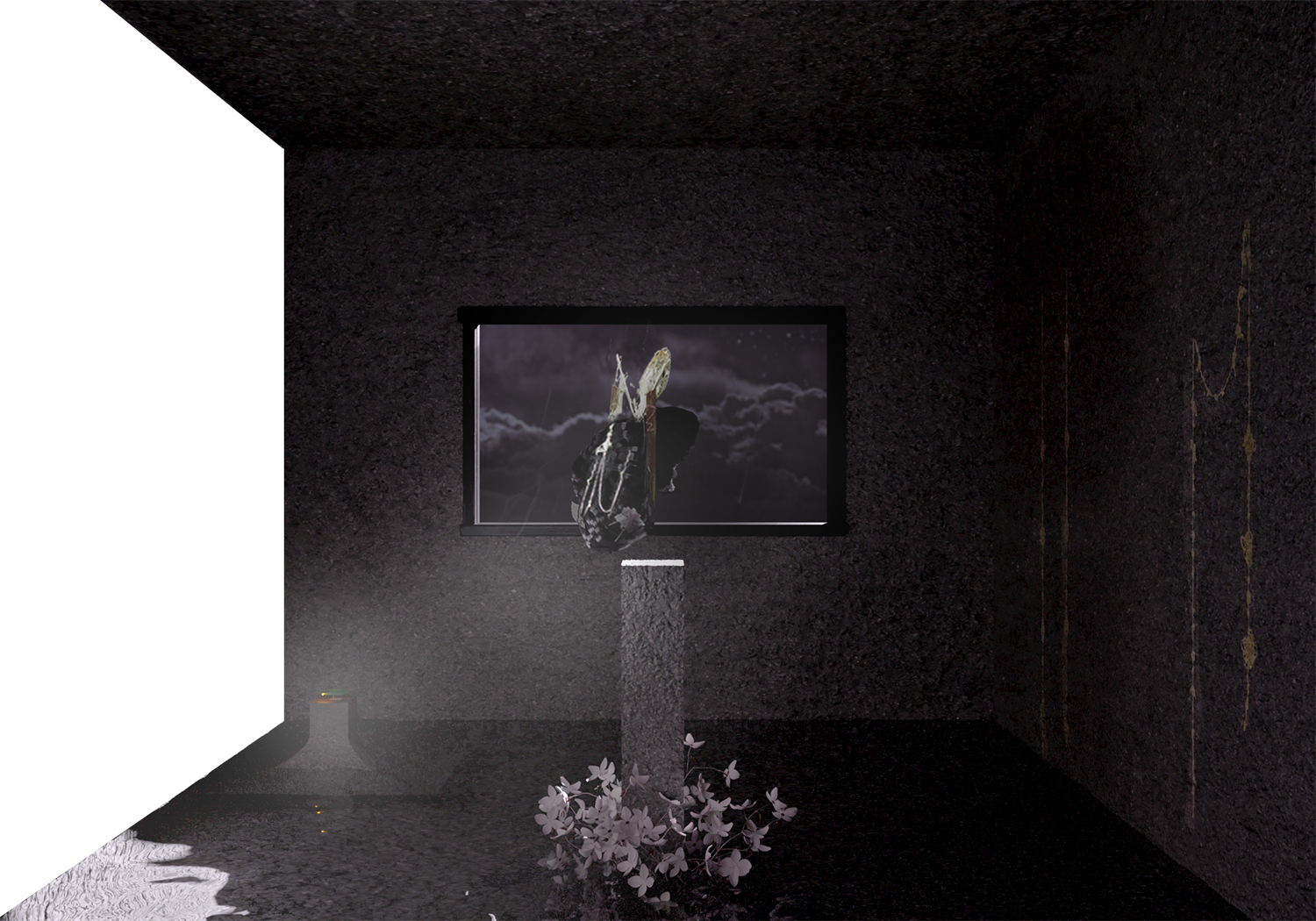 Looping refers to journeys through unknown waters, the threads that we use to haul ourselves forward. Celebrating tactility and the connections generated through engagement, the exhibition includes woven sculptures, hair pins, drawings and a plushie. Looping is a verb that knots, tangles and binds.

At the peak of my childhood, I loved Teen Titans. I aspired to be Raven - dark, mysterious, unyielding. Meditating in her dark purple room, levitating as she recites azarath metrion zinthos, having a demon for a dad. She was who I wanted to be as, at eight years old, I sat with my cat, eating nutella toast, waiting on my nana to bake fish fingers for tea. It was an aspiration well out of my league, but, to this day, I continue to look up to the badass female typecast. Rosa Diaz from Brooklyn Nine-Nine, Angelina Jolie in Girl, Interrupted, and of course the Daria Morgendorffer and Jane Lane duo. It’s sad to admit that I am 100% Starfire, but one can dream.

I wonder if we’ve all had fantasies of being the cool girl who has an array of sarcastic comebacks to spit on the fly, kicks ass and rocks black outfits 24/7.

The concept of the mysterious, badass female character who masks their sensitivity and emotion through apathy is the feeling I get from Wet Green’s Booth. This meditative nightmarescape is soft in its detail: the monotony of voice and subject in Lillian Paige Walton’s poetry reading is balanced out by the melodic use of imagery; Wai Ching Chan’s knots hang like vines in the darkness, yet remain tacitly infinite in a series of loops and plaits; Jenny Takahashi Palmer’s hair pins and pink orchids sit atop and around a central shrine, hauntingly beautiful, dainty, and feminine.

Together, a mantra is formed - repetition and connection through water movement, vocalisation, weaving, and daily practice - in a space that bends time and shares a likeness to Raven’s bedroom.


[The user can manipulate time in the general area or for a specific target in various ways, with the most basic of acts revolving around accelerating, slowing, stopping and even rewinding or looping time.](<https://powerlisting.fandom.com/wiki/TimeManipulation#:~:text=Event%20Manipulation%20 %2D%20manipulating%20time%20through,of%20events%20that%20effect%20time>)_

Lillian Paige Walton’s words, voice, and tempo in “The Room in Which I Write” depict the existential anxiety related to creative practice. The presence of the men who watch her from above, and the snakes that carpet her ankles quicken the pace, burdening the writer with an incessant pressure to write faster. Juxtaposing this is the slowness felt in the submerging of feet in both sand and water, and the writer’s reluctance to return. It is an uncanny experience listening to these words. I often find myself hitting those brick walls, frustrated in my own making, feeling vulnerable to the external expectations of institutions, the public, friends and family. There comes a point where we hate what was once a source of happiness. The self-doubt and self-hatred that comes with creative practices is cyclical, much like this piece. Walton starts and ends at a similar point. She enters and exits after the whirlpool of ups and downs she experiences while inside her writing space. It is all too common in these fields - questioning the reality of our work within wider contexts; going back and forth between working as a factory to churn out work to remain relevant / put food on the table, and being creative for self-fulfilment and enjoyment; the incompatibility of one’s ideas, set of skills, and resources. Introspective conflict and ambivalence is part of the creative process and is often psychologically crushing. Time is never on our side, and the subconscious desire to do more and be more shines its flashlight on works still in the making.


[Astral projection is a term used in esotericism to describe an intentional out-of-body experience that assumes the existence of a soul or consciousness called an "astral body" that is separate from the physical body and capable of travelling outside it throughout the universe.](https://en.wikipedia.org/wiki/Astralprojection)_

Jenny Takahashi Palmer’s hair pins and orchids remind me of my nana. I think about the time she placed a silver fascinator in my hair, her shell collection, and her long salt and pepper braid. I also think about my childhood in East Auckland, watching aphids zip around on green leaves and pink and white flowers on my fence. The sentiment of flowers and hair adornments run deep in this work. A bodiless head of hair sits on its pedestal, lit by moonlight, and lifted up from the water by a bouquet of pink orchids. All these objects are reflected in the water, and form shadows in the space.

The similarities between Māori culture and Japanese culture are evident in the way hair ornaments are treasured and kept. Heru - in association with the most sacred part of the body, the head - are considered tapu and a sign of status. Heru are perched high in top knots for all to see, the peak of the body, a show of power and boldness much like the spread tail-feathers of a peacock. Whether shaped by bone, wood, metals, or rock; here or across oceans in Asia and the Pacific, heru hold immense mana and memory. The delicacy in Jenny’s heru reflects the care and respect she has for them as objects, showing an understanding for their energies and life forces. Taonga / heirlooms / hair pins allow us to transcend our own existence. They act as mediators and teleportation devices that collapse separations in time and space. Through these objects, we can connect to those outside our realm of reality: tīpuna, deities, celestial bodies, and mythical beings.


Psychokinesis, or telekinesis, is an alleged psychic ability allowing a person to influence a physical system without physical interaction.

The other night, during an exhibition opening, Wai Ching Chan poured my prosecco, and I asked her if she was a Pisces. She was taken aback and I felt intrusive, but I reassured her that I was also a Pisces and picked up on her “soft vibes”. Truthfully, I connected to her works because they reminded me of my own, and just guessed we were the same star sign. Her knots, although slim, have a presence that is alive and extends the perimeter of their reach. I trace figure eights into my palm, imagining the focus and slight hand movements needed to create the knots and loops. Similar to the Pacific concept of the Vā, Chinese knots represent cyclical notions of time and the flowing relationships between the past, present, and future. From hearsay, I learned that Wai keeps her inactive knots and materials in bags made for duvet sets and linens. I imagine the knots resting comfortably under a bed or in a closet, which makes me love them all the more. I also imagine that they are a reflection of her domestic space, perhaps sharing the same colour palette as her bedroom or materially mirroring the fraying fabrics of worn couches and long-loved coats. Weighted, gentle, therapeutic, and infinite, these knots drop and pool, creating totemed bodies that map the artist’s movements, thoughts, and traditions.


ASHLEIGH TAUPAKI (Ngāti Hako, Hauraki) is an artist and writer based in Tāmaki Makaurau. Her work draws on ideas of oral tradition, and Māori concepts of place-making as it pertains to self identification and ancestral association. Taupaki is currently undertaking her Masters at Elam School of Fine Arts, The University of Auckland, having completed her Bachelor of Fine Arts (Honours) in 2019. Work by Taupaki has recently been included in the exhibitions WYF: Where You From (2020), Te Uru, and Fire-Lit Kettle (2020), Enjoy Contemporary Art Space. Taupaki is half of the artist duo VVAI with Jasmine Tuiā. She is also the co-curator of Window Gallery, Tāmaki Makaurau Auckland.

Wet Green is a gallery project founded by Becky Hemus and Eleanor Woodhouse in 2019. Their inaugural reception, Mondmuschel, was a performance, fashion collection and exhibition by Hannah Maria Schmutterer. Based in Tāmaki Makaurau, Wet Green's location is currently a moving droplet, appearing for their second outing here at May Fair online.
Back to the Fair